Constructioninformer is supported by its audience. When you buy through our links, we may earn an affiliate commission. Learn more

Disposable gloves are prevalent in various fields, including professional work and daily life. They are mostly used in healthcare settings, protecting patients and workers from direct exposure to bodily fluids and dangerous bacteria. In short, their applications are plentiful and indispensable in certain work.

Still, not many know about the history of disposable gloves. To give a quick review over how this invention becomes essential in surgeries, here’re some important marks to follow:

When Were Gloves Invented?

There are many references to the use of garments covering our hands, dating back to the Middle Ages. Later, gloves were officially recognized in the 13th century, as they became a fashion statement of high-status ladies.

Leather gloves first appeared during the 1400s due to the demand for more durable gloves to handle physical work. Then, fabric gloves were invented in the 1500s, and they became stylish and soft handwear, desired by both ordinary and rich folks.

It took several more decades for the first disposable rubber glove to be invented. It might not come as a surprise that a surgeon is the one who came up with the idea for this new type of gloves. 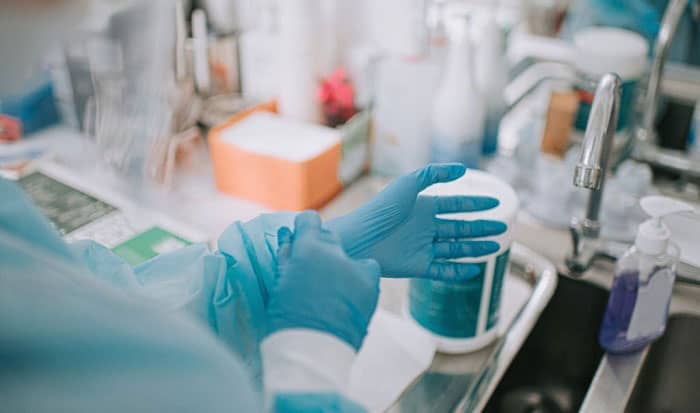 Dr. William Stewart Halsted, who was a surgeon working at Johns Hopkins Hospital, is an influential figure in the medical field. His achievements include the invention of the United State’s residency training system, the mastectomy procedure, and the introduction of rubber surgical gloves.

In May 1889, the idea of making rubber gloves came to him after pondering over a complaint from one of his nursing assistants, Caroline Hampton. She reported to him that rashes appeared on her hands after working with multiple chemicals during surgical procedures.

After completing his design for this new type of gloves, he contacted the Goodyear Rubber Company to discuss the production for what was later recognized as the first rubber pair ever. The request was a huge success, as the gloves were introduced into Johns Hopkins Hospital and more health facilities.

Then, the rest is history.

When Did Doctors Start Wearing Gloves?

Doctors started wearing surgical gloves in the 1890s. Rubber gloves were used back then to increase dexterity when handling equipment and operating on patients.

At that time, doctors and nurses were not aware of the significance of these gloves in hygiene improvement and reduction of mortality rate for surgery patients.

When Did Rubber Gloves Get Sterilized?

After a proposed and accepted theory about disease caused by germs, the medical community were woken up to the critical use of gloves as a barrier for hygiene and protection against microscopic organisms.

Therefore, in 1894, a process of sterilizing rubber gloves was conducted by Joseph Lister, a British surgeon and medical scientist. He then became the first doctor to use carbolic acid for sterilization.

Another important change came in the 1960s, when doctors stopped using one pair of gloves repeatedly for different patients.

In 1965, The Ansell Rubber Company developed a lower-cost and efficient method for sterilizing disposable surgical gloves with Gamma Irradiation. It marked the beginning of gloves being truly disposable.

The Introduction of Various Materials

Disposable gloves have experienced various changes through the course of history. Besides the development in sterilization methods, advances in materials were also essential.

They are low-cost, and their protecting capability is not that high, so these Vinyl pairs are often used in settings with low infection risk and chemical hazards.

When Did Disposable Gloves Become Mandatory?

The Occupational Health and Safety Administration (OHSA) raised the awareness of using protective equipment during healthcare processes with its Bloodborne Pathogens Standard in March 1992.

In the publication, OHSA requires employers at hazardous working environments to provide their personnel with proper pieces of protective gear, including qualifying disposable gloves.

Is the history of disposable gloves more interesting than you thought? It sure comes with many surprises. The story unraveled from how the first rubber gloves were not used for hygiene purposes to how the change of the materials offered more protection to patients.